Classic musical ‘The Fantasticks’ to be staged at Ripon College Nov. 13-16

The timeless musical The Fantasticks, by Tom Jones and Harvey Schmidt, will be presented by the Ripon College departments of music and theatre Nov. 13-16. Performances will begin at 7:30 p.m. in Benstead Theatre, C.J. Rodman Center for the Arts.

Admission is free, but reservations are highly recommended and can be made by calling 748-8791 or emailing [email protected]

The Fantasticks is the longest running musical in American history. Started as an adaptation of a play by Edmund Rostand by two college classmates, The Fantasticks became an unlikely hit in New York where it was a revolutionary contrast to the big book musicals of Broadway.

Beginning in 1960, the musical ran for 42 years until 2002. Then, it was revived in 2006 and ran for 11 more years until 2017. The Fantasticks ran for 53 years in New York and has played in 67 countries. During that span, Ripon College produced the musical twice: in 1963 when a young Harrison Ford played El Gallo; and in 1987, when Adjunct Instructor of Music Maria Dietrich, a member of the current band, played keyboards.

The play is directed by Professor of Theatre Kenneth Hill. Set and lighting designs are by John Dalziel, associate professor of theatre; and costumes are by student designer Heidi DeCaluwe ’20 of West Bend, Wisconsin. Courtney Hall ’20 of West Allis, Wisconsin, is the assistant director, and Lindsey Wigand ’22 of West Allis, Wisconsin, is the stage manager. The musical and vocal direction is by Erin Bryan, assistant professor of music.

(Photo: From left to right, Benjamin Marns as Matt, Wil Bridenhagen as El Gallo and Maria Reber as Luisa rehearse “The Fantasticks.”) 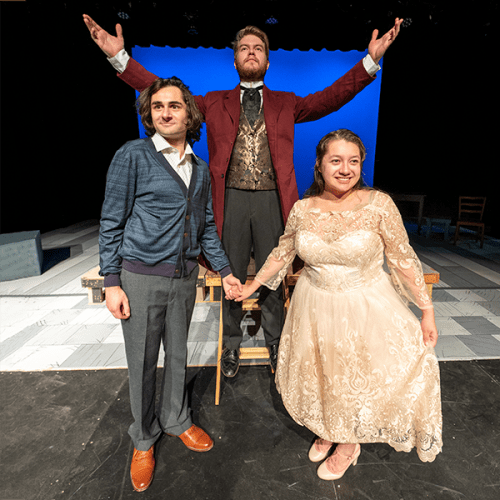