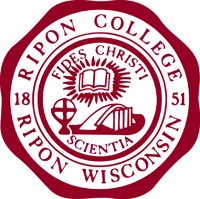 The first icon was adopted in 1855 in the form of the Brockway College seal. Brockway was the second name of the institution – the Lyceum of Ripon being the first – named for William S. Brockway who presented the winning bid of $250 in an auction to name the College.

The Brockway seal featured a female figure with a cornet and star on her forehead. In her right hand she held a telescope and in her left a shield bearing a crop from where rays of light diverged.

The influence of the Christian church was evident in this first seal. Circling the figure in Latin were the words from Psalms 11-16 “In virtute Domini Dei ibo,” or “I will go in the strength of the Lord God.” Encircling the entire seal were the words “Brockway College, Wisconsin 1855.”

When Brockway officially became Ripon College in 1864, it was obvious a new seal was needed. However, It wasn’t until 1868 when the Ripon seal was adopted as the official seal of the Board of Trustees of Ripon College. This new seal also revealed the influence of the church, including the Latin phrase “Fides Christi Scientia,” or “Faith in Christ is Knowledge.” William E. Merriman, president of the College from 1863-76, was a known “churchman” according to “Ripon College: A History.” During his tenure, the College received active support of churches in the central and northern part of Wisconsin, especially from the Congregationalists.

“[Ripon] is a Christian college, under the influence of the Congregationalists,” said Merriman concerning the College’s relationship with the church. Although Ripon was free of church control and open to students of any denomination or belief, it was under this atmosphere of Christian morality that the seal was adopted. 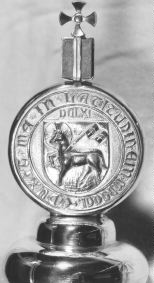 Like the seal, the ceremonial mace (carried by the faculty marshal at the head of the academic procession for commencement and other formal ceremonies in which faculty process) was created based on Christian values. A relic from the ancient city and collegium of Ripon, England, the mace signifies the continuity of tradition between the new world and the old.

The presentation of the mace to the College, Nov. 19, 1946, by Rev. Edward N. West, Canon Sacrist of the Cathedral of St. John the Divine of New York, marked the opening of Ripon’s centennial observances which culminated in 1951. West made the presentation on behalf of G. Birchenough, dean and chapter of Ripon Cathedral, Yorkshire, England. In his presentation address he offered the mace to Ripon College as a “time-honored emblem of an august body corporate.” 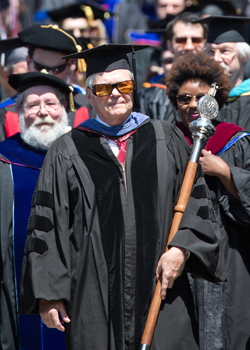 The silver cross at the top of the Mace is of an ancient English pattern. The stone is one cut from the church which St. Wilfred built in Ripon, England, in the year 670. On one face of the silver knob is the Agnus Dei seal taken from a twelfth century rendering of the seal of the Collegium of St. Wilfred, Ripon. Above the shield is the date of St. Wilfred’s foundation, and circling it is this legend. Eduxit Me Latitudinem (He led me forth into a place of liberty,) and the Latin letters for 1850, the year of Ripon’s foundation in the new world.

On the reverse is the seal of Ripon College, and surrounding it the legend, “Attendite Ad Petram Unde Excisi Estis” (Look unto the rock whence ye are hewn). The rest of the silver and oak Mace is modeled after one made for Winchester Cathedral of St. John the Divine. The detailed design and the fabrication was done by Black, Starr and Gorham under the supervision of Mr. Louis Glazier.

Having endured nearly 50 years of ceremonial processions at the College, the mace underwent restoration in 1994. Gene Kain, assistant professor of art and gallery director, reconstructed the mace’s oak staff and Diedrich Jewelry Co. of Ripon replated its two silver pieces. The new mace made its first appearance in the Spring 1995 Awards Convocation. 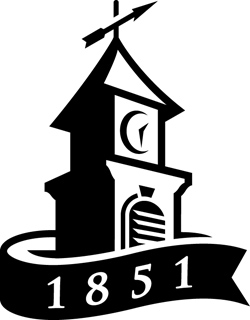 Since its construction in 1944, Harwood Memorial Union has served as the central gathering place of the College. The clock tower which sits atop the union is an easily recognizable fixture and icon of the campus.

For that reason, the clock tower was chosen for a new college logo in 1991. Designed by Lee Shippey, art department assistant, the logo was chosen because it illustrates Ripon’s traditional philosophies while maintaining the college’s contemporary and progressive nature, according to Loren Boone, director of college relations.

The new logo is commonly used on less formal college publications, as well as the facility signs located on campus.

Inscription on the Library Entrance

The College continues to maintain its tradition and secure its national identity through the use of its icons. In the competitive field of higher education, especially among private colleges, identity plays a pivotal role in admission and fund raising.

To assist the College in consistent presentation through promotion and publications, the Office of Marketing and Communications has developed an institutional graphic identity manual.

A resource for both internal departments and external vendors who apply any of the college’s logos.