The performance will include works from the ensemble’s March 2022 album, Emigre and Exile, featuring composer and bassist Matt Ulery.

Arcomusical is a world music sextet reimagining the Afro-Brazilian berimbau through a repertoire of unique, powerful, original concert chamber music. Projeto Arcomusical formed in 2013 and has released two albums, “MeiaMeia” and “Spinning in the Wheel,” and several music videos. Performance highlights including the Percussive Arts Society International Convention, universities and theaters in the United States, and capoeira schools and festivals of contemporary music in Brazil. In 2019, they premiered Roda Grande, a sextet concerto with the Arizona State University Symphony Orchestra.

Although the berimbau is a well-known instrument in Brazil, most people in the United States remain unaware of this instrument family and its elegant beauty and simplicity. Musical bows are the most popular and widespread traditional string instrument found throughout sub-saharan Africa, and the berimbau made its way to Brazil via the Transatlantic slave trade. The berimbau’s closest relatives are found in southern Africa, specifically in the Portuguese-speaking countries of Angola and Mozambique. 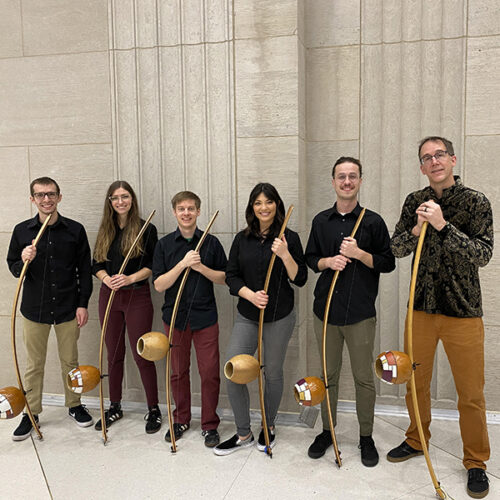